The VW nitrogen oxide and now CO2 saga shows that pollution is still a concern, and reminds me of the recent story of heavy metal pollution in Colorado turning a river literally yellow: could it feature in GCSE Chemistry? 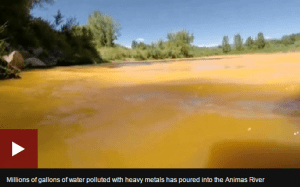 Truth is stranger than fiction. The theme of the Simpson’s movie was that the USA Environmental Protection Agency (E.P.A.) turned into bad guys and erected a giant dome around Springfield in an attempt to contain the water pollution that Homer had started.

In August however the tables were turned when the real E.P.A, accidentally pumped polluted water into a Colorado river while clearing up a mine. The pollution spread and extended over the border to New Mexico and the river turned yellow, becoming contaminated by heavy metals including lead, iron, zinc, copper, mercury and arsenic. Read more in the BBC’s account and CNN broadcast

Could pollution and heavy metals feature in GCSE chemistry? Well, it is at the margins, but yes they could. Heavy metals are amongst the transition metals of groups 2 and 3 of the periodic table, of which students must know the layout.

Pollution as a whole is often featured these days in GCSE chemistry as a supplementary question, sometimes around acid rain. For instance one specific sample question was to “list the advantages and disadvantages of mining metal ores” to which a good answer might include “they can cause difficulty in clearing up once closed down, as shown in a recent incident in America”. It is worth students talking to their Chemistry teacher about the incident.

Water purity sometimes crops up as well in GCSE, with one of the purposes being to remove heavy metals.

It remains to be seen whether the American Government will fine itself several billion dollars, as they did to BP after the Gulf of Mexico oil spill (I declare an interest as a BP shareholder and former employee !) The affected Narajavo Nation for instance is already threatening to sue. It reminds us in Europe of the sad decline in colour of the Blue Danube. 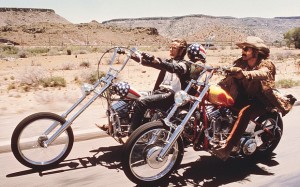 To finish on a lighter note, while Yellow River certainly was not a Heavy Metal record (it was by UK Group Christie) it is worth mentioning the possible origin of the term Heavy Metal. In Chemistry it is because the metals mentioned have high relative atomic mass. In music it is probably from the phrase “heavy metal thunder” in Steppenwolf’s “Born to be Wild” which featured in the biking film Easy Rider (above) , or from the title of Iron Butterfly’s 1968 album “Heavy”. Many songs claim to be the first truly heavy metal song, the most famous of which are the Kinks “You Really Got Me” and  the Beatles’ “Helter Skelter” at the end of which Ringo, after drumming so loudly, famously agonises “I’ve got blisters on my fingers”!

GCSE-taking teenagers (OK, of the boy variety) will probably associate  heavy metal most closely with AC/DC, and their soundtracks from the films Iron Man 2 (Robert Downey Junior) and Battleship ( Liam Neeson, Rhianna), or from the video games like Rock Band and Mad Max. Parents may be interested to know that AC/DC’s Back in Black is the second highest selling album ever behind Michael Jackson’s Thriller, and ahead of Pink Floyd’s Dark Side of the Moon, Whitney Houston’s Bodyguard, and Meatloaf’s Bat Out of Hell. Could there be such a diverse set of albums?